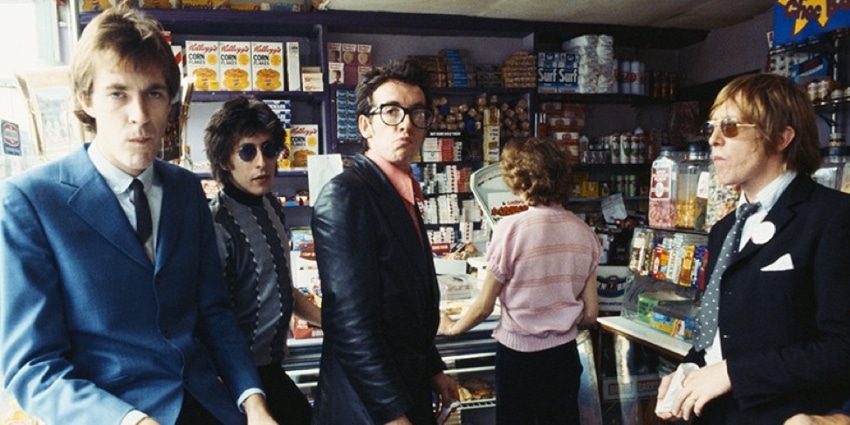 It’s nearly impossible to put a label on the vast swaths of music that emerged from out-and-out Punk Rock in the late ’70s and early ’80s. What we do know is that the 3-chord, stripped-down simplicity of Punk soon gave way to a diverse, expanding palette comprised of more sophisticated instrumentation, production, and influences. As an example, In just two years’ time, Punk stalwarts, The Clash, morphed from the bread and butter rocker I’m So Bored With The USA off their ’77 debut to the polished Jimmy Jazz from ’79s epic London Calling.

Where the hell to start? Not to fret, we’ve put together a stellar list of the top 10 post-punk titles to seek out – whether you’re a completionist or just dabbling in this genre. Quality reissues & expanded versions of all of the albums cited below are mostly available, enabling re-discovery by those who lived during those heady days or for the next generations to enjoy.

To celebrate the 40th anniversary of this landmark album, the Museum of London have launched a fantastic exhibit featuring a collection of artifacts never before seen in one place. The centerpiece of the collection is, of course, the Fender Precision Bass that Paul Simonon smashed on stage at The Palladium in New York City on 21st September 1979. We had the privilege of seeing the exhibit just after it opened in November 2019 and it’s a powerful tribute to this classic album and time period in London and the UK.

“‘London Calling’ is The Clash’s defining album, a rallying call for Londoners and people around the world. The album’s lyrics reflected contemporary concerns, many of which are still relevant today, as it moved away from traditional punk by adopting and reworking much wider musical influences. ”Beatrice Behlen, Senior Curator at the Museum of London.

This was the first of two albums released by the band during 1985 and it remains their most cohesive collection of songs across their catalog. Songs like Celebrated Summer and the Title Track feature the buzzsaw churn of Bob Mould’s guitar with classic rock hooks dropping left, right, and center, somehow managing to surface over the low-fi SST production. The late Grant Hart’s propulsive drumming and pop sensibilities on other standouts including The Girl Who Lives On Heaven Hill and Songs About UFOs add levity and balance.

This is the album that Robert Smith let some sunshine filter through the thick layers of goth and minor-key gloom that marked previous releases like The Top, Pornography and Seventeen Seconds.

Lead track In Between Days featured jangly guitar, happy-sounding synths, and an inspired vocal performance by Smith. Later, Close to Me and A Night like this further cemented the new-found upbeat vibe. The anthemic and at times soaring closing track, Sinking, gave clues to what was still to come two albums later with Disintegration.

The album that broke David Byrne and the band into the mainstream with Burning Down The House quickly achieving heavy rotation on MTV. Bluesy eep cut Swamp was used in a key scene in the season’s biggest film, Risky Business, to great effect, further cementing the album’s smash hit status.
This Must Be The Place, one of Byrne’s greatest songs, is a standout. The Speaking In Tongues tour was famously documented in the groundbreaking concert film by Jonathan Demme, Stop Making Sense.

Blurring the lines between Post-Punk and New Wave, Costello’s second album, (and first credited with backing band, The Attractions), is the album to seek out from his great string of albums up to Blood and Chocolate. Obvious hits like Pump It Up and Radio Radio are definitely the business but for the best that Elvis can do, drop your needle on Little Triggers – sublime! The angry young man had a heart too.

If David Bowie and Brian Eno seek you out to produce your debut do you need any other calling cards in life? From the opening sped-up chords of Uncontrollable Urge, lifted straight from I Want To Hold Your Hand, something seemed a bit off but also familiar with this band from Akron, Ohio. The radically reworked Satisfaction cover sealed the deal – these guys were way left of center and proud of it. Mongoloid, Space Junk and Come Back Jonee add to the overall appeal.

With their debut, Devo caught the attention of music fans everywhere, not to mention classic rocker, Neil Young, who famously cast the band in his 1982 bizarro film Human Highway.

With I Will Follow, David Evans and Paul Hewson introduced themselves to the world respectively as The Edge and Bono. Stars were born. The Edge’s diamond cut guitar riff and Bono’s evocative lyric created a template for hundreds of bands to eventually follow – everyone from Big Country to The Alarm. Their debut album showcased a well-oiled band who had been playing most of these songs in clubs for the past three years. The sleeper song on the LP is Out of Control – demonstrating each member’s contributions that would become their hallmark for decades to come – Adam Clayton’s timekeeping, Larry Mullen’s driving bass line, The Edge’s unique guitar chord progressions, and Bono’s stagecraft.

Wearing their influences on their sleeve, this quartet from Athens, Georgia catapulted from the college rock scene into the mainstream in just a few short years. Michael Stipe’s by-the-letter Velvet Underground live covers and Peter Buck’s ringing Rickenbacker signaled a band that had done their homework. Mix in Bill Berry’s power stroke drumming and Mike Mills’ cascading bass lines and you had a recipe that couldn’t miss. Both Murmur and Reckoning, which came soon after, are fantastic albums that should belong in your collection.

Like Peter Buck, Johnny Marr’s guitar of choice was the Rickenbacker, used to add jangly circles of sunshine over Morrisey’s at times troubling and dark lyrics. Prime examples include What Difference Does It Make and The Hand That Rocks The Cradle. This was the album that set the template for an inspired run of albums before Morrissey and Marr decided they hated each other. Will Coachella finally get them? Doubtful.

After Ian Curtis’s suicide, Bernard Sumner, Peter Hook, and Stephan Morris had no other choice but to carry on and file away their shock, feelings, and songbook. For their 2nd album, only three years after the demise of Joy Division, Gillian Gilbert was asked to officially join the band on keyboards and guitars – she had been romantically involved with Morris for the past several years.

Power, Corruption and Lies was a more fully realized album than Movement, with their full embrace of synthesizers, placed front and center in the mix. While touring America, they had found their way to New York, spending nights in clubs like Mudd Club and Danceteria, soaking in DJ sets which typically included a non-stop mix of punk, funk, Cuban and Eurodisco – anything to keep people moving. The blockbuster single, Blue Monday soon followed, with easily detectable influences like Kraftwerk and Giorgio Moroder.

There you have it! Our list of the creme de la creme of Post-Punk. This is a subjective list, there’s no doubt about it. Naysayers may scream, “What about the Feelies!” We get it. There’s going to be contention with any Top 10 list but you have to start somewhere and we believe this list covers most bases. If pressed, we have no problem in submitting a few albums that were definitely in the mix but didn’t quite make the first cut. Here they are: The B52s (debut album), The Feelies – Crazy Rhythms, Public Image Ltd. – Metal Box, The Violent Femmes (debut album).